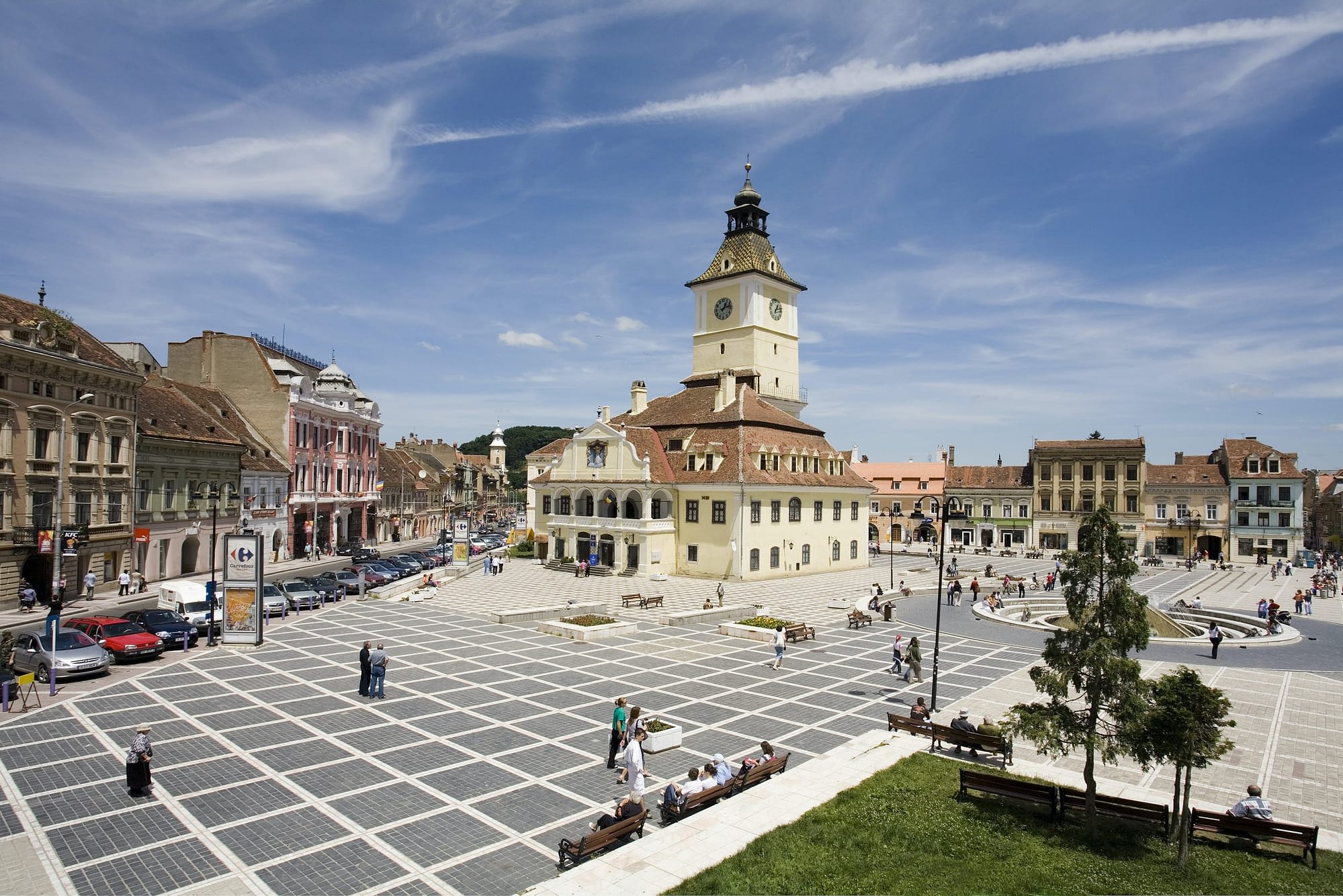 Last week we took you to Bucharest in Romania. This week is Brasov, Romania. We told you about how wonderful the rest of the country is, so we could not help ourselves with continuing the topic.

Welcome to Brasov, Romania, a city in Transylvania that is known for its medieval Saxon walls and bastions, its towering Gothic-style Black Church, and its old town filled with lively cafes. When you leave Bucharest and head toward Transylvania, Brasov will be the famous area’s gateway.

This 13th-century city is one of Romania’s most visited cities. Many think it is just a stop on the way to the infamous Castle of Vlad the Impaler also known as Dracula, but are dazzled once they arrive. The focal point of the old town is the arc-shaped town square with the clock tower in the center, Piata Sfatului. This is the perfect spot to grab a coffee or a delicious treat and people watch before you start your exploring. This picture-perfect spot was not always so inviting. In the middle ages, this was the spot of public trials and executions and during the communist rule, cars were purposely parked here to keep people from congregating and socializing.

Just off the main square sits The Black Church, the largest Gothic church in Eastern Europe. The Black Church is not black in color but earned the name from a 1689 fire that burned the church and the darkened walls. Although not as opulent as many of the Cathedrals in Europe, you can marvel at the Anatolian carpet collection that adorns the walls. They give insight into the geography and history of medieval Brasov and its cultural influence as a crossroads.

Give yourself time to take the cable car up to the Brasov sign for a bird’s eye view of the city. You can also hike if you are up for it, just remember comfortable shoes.

Take one of the many tours that are available to get a local history lesson while you stroll through Brasov. Every night between April and September at 6 p.m. a free walking tour by Walkabout sets off from the fountain in the main square. (Check their website for tours between October and March.) Look for the person holding or wearing something orange.

Take a full-day tour if you’re looking for a deeper experience. That includes Brasov city, the wilderness of Transylvania, Bran Castle, and Peleș Castle, and fascinating stories about Vlad the Impaler and Dracula. We suggest signing up for a food tour as well. There are many great cafes and food carts around the city. It is fun to not only taste the foods that are original to this area but to find out the history of them.

Remember to look up and notice the artistic details hiding in plain sight. When you’re ready, and the tour is finished, sit at an outdoor cafe and soak up the ambiance surrounding you.

Catherine’s Gate is the last standing original medieval gate. It was constructed in 1559 and prominently displays the Brasov coat of arms. The Saxons adorned gates such as this with 4 small turret towers in each corner. It is about as fairy tale’ ish as you can get except for the fact that visitors who passed through the gate understood the turrets to mean they were under the rule of the Town Council who had the authority to hand down a death sentence.

There are neighborhoods outside of the city center that is worth a visit. Lower town in Sibiu and the Schei Districts were formed because the Saxons that ruled Brasov Romania during the 13th-117 century would not let Romanians live within the town. They are great to explore and a history lesson in themselves. You would be remiss not to see the Brasov Historic Saxon Center and compare what you see from both.

Have you eaten a trdelnik in Prague? The Romanian relative of the sweet cylinder cake roasted on a spit and sold from street carts is called Kurtoskalacs.

We will feature 2 more cities in Romania and continue to expose this country that few people have on their travel list, but should.

Are you getting closer to putting Romania on your list? We are ready when you are.

Chernivtsi, Ukraine Chernivtsi is a city in the western part of Ukraine. It is situated on the upper course of the Prut River and is…

Sibiu, Romania is located in Romania’s region called Transylvania. We mentioned it in the last article as being an outlying settlement for the Romanians and…

Riga, Latvia Latvia’s capital is set on the Baltic Sea at the mouth of the River Daugava. It’s considered a cultural center and is home…