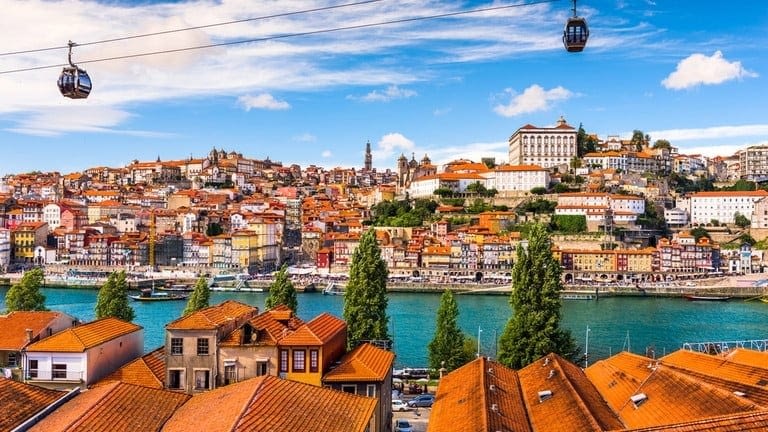 Porto is Portugal’s second-largest city. Situated on the Douro river, it is split in two much like other cities in Europe like Budapest. One side of the river is shown in the photo below. The banks are lined with colorfully painted buildings. On the other side of the river lies Vila Nova de Gaia and the hub of the port wine industry.

Porto has a charm and beauty that is overshadowed by the more popular Lisbon. The historical and cultural center known as Cais de Ribeira is the industrial and commercial hub of the city and is a UNESCO World Heritage Site. Porto is for food and wine lovers alike. While here take part in Portuguese gastronomy and wine.

Things To Do While In Porto

Things that you will want to do while you are here is stroll the cities Ribeira neighborhood. Known as Cais de Ribeira, this is the riverfront area and it is filled with restaurants, cafes, and bars. Wine sipping and people watching is a great way to spend the afternoon while listening to street musicians.

Make it a point to visit the Douro Valley. Seeing the Douro Valley should be at the top of the list while in the region. It is one and one half to two-hour drive East of the city. There are day trips that can be taken.

Climb the 225 steps of Clerigos Tower to see the spectacular 360-degree view of the city. It has been a National Monument since 1910. The building houses a bell tower, church, and a museum.

Things to Eat While In Porto

The Portuguese love their coffee! Several times a day they sip their cafe but do not expect to “Starbucks” your order while you are there.

Click on a dish for a picture and more information

Plovdiv is an ancient city in southern Bulgaria, built around seven hills. It boasts being the oldest continually inhabited city in Europe dating back some…

Norwegian Cruise Lines Look what just came in! New collateral from NCL. These new books cover all of their sailings around the world with details…